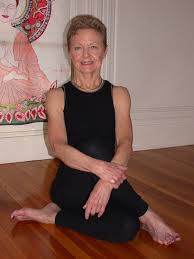 Success is Enlightenment With Yoga

Success, right? Yet, at mid-life, that was just the beginning for Eleanor. Now, at 77, living in semi-retirement in Sarasota, this fireball is recognized in numerous publications as one of finest yoga instructors in the U.S.

“I was a bookish, non-athletic child who never missed a day of school,” she recounted. “ I felt quite alone and generally inferior.”

Perhaps it was a newly found confidence that came after earning her degree that opened up her world, but it was yoga that transformed her, she says.  “ I discovered yoga gave me a growing serenity, self-confidence and feeling of being grounded . That’s what I call success.”

After college and before yoga, Eleanor had short stints as a stockbroker and a Divinity School student. While studying to be a chaplain, she injured her knee and was referred to a noted Iyengar yoga teacher, Patricia Walden, to “straighten out her crooked body.” The rest is history.

“After 51 long years of struggling,” my Self and my Soul were reunited, “ she says.

At last, she had found something she is “crazy about and good at.”

Studying with the “greats” in the field in the U.S. and India, Eleanor immersed herself in yoga. “The secret is continuous learning and hard work, all day, every day, improving through practice.”

Having demonstrated that “when the student is ready, the teacher will appear,” Eleanor established the yoga program at Harvard University and for 20 years taught 12 classes per week at her studio Iyengar Yoga in Harvard Square.

Today, she teaches classes periodically in Sarasota, keeps up with her large family (now with 8 grandchildren) and can be seen participating in numerous social, community and athletic activities around town.

Is she still as passionate about yoga? Her answer: “If Jesus comes back, he’ll be Iyengar yoga teacher!”  When Eleanor speaks, you’ve got to believe.